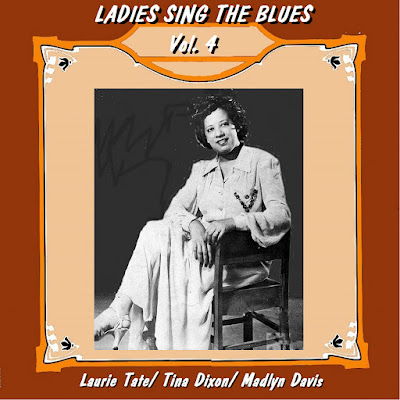 Let's start our fourth volume of those "Ladies sing the blues" series with Laurie Tate. Surprisingly, very few is known about this fine blues and jazz singer who was one of the first in a long line of R&B divas who shaped the success of Atlantic Records. Laurie came, reportedly, from Richmond, Va to New York City to try her luck as a singer and she was signed to Atlantic in May 1950, recording quickly two sessions backed by the Joe Morris band, a solid unit which plays a major role in the success, artistically and commercially, of those eight tracks. The scorching ballad Anytime, anyplace, anywhere climbed n°1 to the R&B Charts, establishing Atlantic as a new important label. Tate joined permanently the Joe Morris' Blues Cavalcade for awhile and toured briefly the West Coast as a featured singer. But soon, for family reasons, this very promising talent quit the music business and she was replaced in Joe Morris' band by Faye Adams. Apparently, nobody knows what happened to Laurie after 1952.

Tina Dixon, "The Bombshell of blues" started her career as a jazz singer in Detroit clubs like the Ballyhoo before being hired as the featured singer of The Jimmie Lunceford Orchestra as soon as 1943. She thus toured the Army and Navy camps during WWII and recorded special 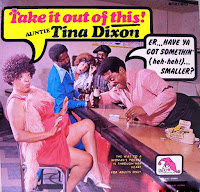 programs for the troops, particularly the first version of E ba ba lee ba in August 1945, claiming she wrote the number before Helen Humes's record that hit the Charts. She left Lunceford to pursue a career of her own, recording a new version of her hit in 1945. Married with the famous tap dancer Louis Collins, Tina toured with her husband, joining King label, waxing some proto-R'n'Roll sides but a real commercial success never came. Anyway, the very wise and brave Tina Dixon switched to a new career in the comedy theatres with (sometimes very) risqué pieces and plays and she became very popular among African-Americans during the late 1950's under the moniker Aunt Tina Dixon, waxing two "dirty" and very commercially successful LP's and appearing in some Television shows, particularly the very popular Sanford & Son series 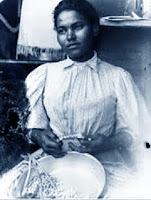 Madlyn Davis belongs to a former generation of lady singers, contemporary of Ma Rainey, Bessie Smith and Victoria Spivey. Her life is unfortunately ill-documented but her four sessions for Paramount Records done between 1927 and 1929 are of a very high standard. Kokola blues from November 1927, backed by Richard Jones on piano, is the very first recorded version of Kokomo blues/ Sweet home Chicago. Her great last session (October 1929) finds her alongside Tampa Red and Georgia Tom Dorsey! I don't know what became of her after that.

Gérard HERZHAFT
Thanks a lot to bluesjumper33, Jose Yrraberra and Charles F. for their help. Every extra facts about those singers will be very welcome. 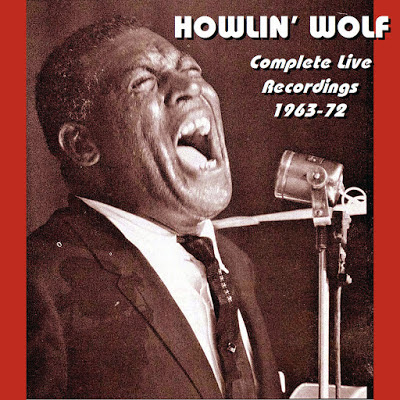 After those of Sonny Boy Williamson (Rice Miller), we have tried to gather all (or the most possible!) live recordings of another blues master, Howlin' Wolf!
The task has been - if any!- even more complicated because spanning on a decade.
Even if Howlin' Wolf has been recorded live at the Copacabana Club in 1963 for the Argo LP's "Folk Festival of the Blues", the bulk of his 1960's live recordings was mostly done in Europe. He was one of the big star of the AFBF 1964, taking the dedicated European audiences by storm. His success was such that he and some members of the AFBF line-up (Willie Dixon, Sunnyland Slim, Hubert Sumlin and Clifton James) embarked in the wake for a further tour of Europe until November 1964. If few of those European 1964 gigs were recorded to be issued on LP, they were done by radio stations with good technical equipments and for the purpose to broadcast some tunes during their jazz programmes. Now they are a testimony of what the Wolf sounded at that time when he was in full possession of his considerable talent and stage presence.
In the USA, Wolf's career took a decisive turn when the Rolling Stones - while touring America in 1965 - insisted with ABC's Shindig, a TV programme very popular to teenagers, that Howlin' Wolf would appear before us. Thus, suddenly, Wolf would be able to be lined-up in festival and concert halls throughout the country before a white audience! Apparently, several of those (and probably still much more laying in the vaults) were recorded, very often on primitive equipments. With the exception of the 1972 Alice's Revisited venue, none of those US recordings had to be issued. They appeared throughout the years on more or less confidential bootleg albums. The sound is sometime very poor and, although we have tried to improve it with our home studio, it's quite often still very bad. We have included them anyway here for documentary purpose more than listening pleasure!
Unfortunately, even he was only in his early 60's, the Wolf was beginning very ill, the dreadful years of his childhood when he suffered greatly violence, abuse and unbelievable bad treatments (he got his hoarse voice because he wasn't allowed by his uncle to sleep in the house, even during cold winters and he had to beg for food to passengers' trains during the nearby stops) took their harmful toll. After a bad car accident during 1973 New Years' eve, Howlin' Wolf had henceforth to undergo kidney dialysis several times a week. Although he had still to play gigs throughout the country for making a living, he was strongly diminished and mostly played and sung seated and only a few numbers, leaving most of the set to his band, led by Eddie Shaw. Several bootleg recordings of those late concerts have also popped up but we have chosen not to feature them.
Pour répondre à de nombreuses demandes, je remets à jour cet article avec de nouveaux liens. Mais, ayant eu des problèmes pour conserver ces liens la première fois, je ne peux savoir combien de temps ils pourront rester valides. Ce sera donc la dernière fois que je mes remettrai en ligne. Aussi, prenez les tant que cela est possible.

I've reuploaded this article and links to answer to numerous queries. But, as I have had problems to keep those links available, I can't say how long they will be available. In any case, it is the last time that I'm re-posting them. So grab them while it lasts!

The very best Howlin' Wolf biography that really explains the man, his greatness and his masterworks has been written by Mark Hoffman, certainly one of the very best blues books 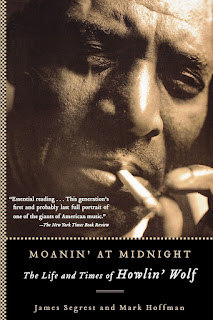