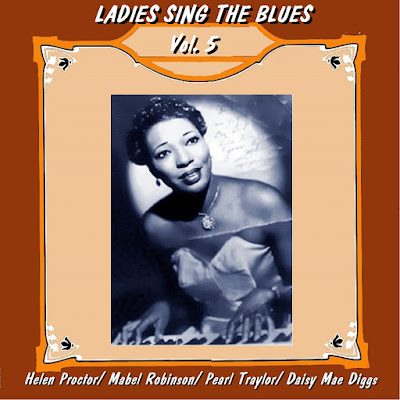 Well... If those ladies featured in the 5th Volume of our series are all good or even great singers, if most of the tracks are good blues with more than a jazz flavor, if they are backed by soulful and very professional bands, they largely stay mostly anonymous artists and with the notable exception of Mabel Robinson, very few is known about her outside their recorded works. At least to me, and despite strong researches through my books and magazines collections and of course the web. Of course, all eventual contributions from readers who'd know better would be greatly appreciated!

Helen Proctor, a fine singer, recorded only six tracks, two in 1938 and four more the following year when she was the featured singer of Henry "Red" Allen's popular band. We don't know either her whereabouts or what she became after the war.
Not much is either known about R&B singer Pearl Traylor who recorded between 1945 and 1951 for Modern and Okeh. Several fine tracks with a minor hit with Around the clock Parts I & II. She is backed by great musicians like pianists Hadda Brooks or Willard McDaniel and Chuck Norris on the guitar. 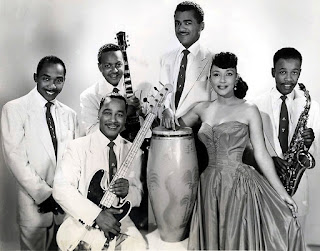 Daisy Mae Diggs is also a good jazzy singer from Philadelphia who recorded eight numbers in the mid-50's with her Hepcats, a small jazz group with guitarists Al Russell and Billy Butler. Not much is known about her except that apparently she appeared as a young dancer with the Les Hite's band in the 1933 movie Sing, Sinner, Sing! (https://www.youtube.com/watch?time_continue=35&v=l2z0QFu6udE&feature=emb_logo)

And now with Mabel Robinson, born Mabel Brown on March 29, 1914 at Cape Charles, Va. Living in Boston since 1931, she started a career as a singer and pianist during the early 1940's, recording six tracks with Sammy Price on the 88s. This led her to be the featured singer on several bands like those of Louis Jordan, Skeets Tolbert, Sammy Davis Sr (father of Sammy Davis Jr) or Roy Haynes. She married Mr Simms in 1939 and appeared as Mabel Robinson Simms, singing and playing piano in numerous

Boston clubs for decades, as a solo act or with numerous bands. In 1956, she formed the Mabel Robinson Trio with her sister Frances Brown, playing as a regular act at the famous Boston's Moulin Rouge situated in the former Hotel Vendome in the Back Bay. She resigned her musical career in 1968 and died in Boston on January 27, 2005 after being honored by the Boston Jazz Society. She apparently didn't record outside the tracks featured here although there are rumours of an album she would have made in the 1950's. 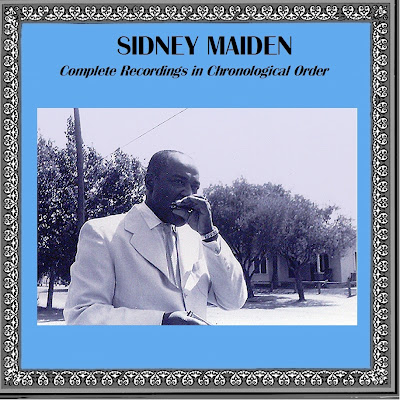 Although the handful of records he made has earned him some reputation among the blues buffs, Sidney Maiden's life and whereabouts are quite obscure and he has unfortunately never been interviewed.
Born on a plantation near Monroe (La) in 1923, Sidney loses his father at a very early age and has to work in the fields with his mother. He learns the harmonica with local musician and utmost in listening to the records of John Lee "Sonny Boy" Williamson.
In 1942, Sidney is drafted and sent on the Pacific front. Discharged in 1945 on a base in the Contra Costa County, Maiden decides to stay in California, works in several plants. He met there K.C. Douglas (see the item on him on this blog), plays with him around the Bay. In 1948 they record a successful 78 for producer Bob Geddins. Sidney blows his harmonica behind K.C. on the famous Mercury boogie and sings as well on the flip, the classic Eclipse of the sun.
Sidney leads a small band, The Blues Blowers, that play a little bit everywhere and he records for the Imperial label in 1952 a lengthy session. But only two titles are issued (Thinking the blues and Honey bee blues)
He must waits 1955 to record again (still a sole title, Hurry hurry baby) with the Los Angeles guitarist Cool Papa Sadler.
At that time and the subsequent years, Sidney resides in the Fresno area, making a living out of the fruit tree industrie. He is part of the small group of downhome bluesmen who live in Fresno (Al Simmons, Guitar Slim Green) called just The Boys of Fresno. They record for Johnny Otis and, once again, Maiden sings only on one title (Hand me down baby).
His old friend K.C. Douglas who has, meanwhile, become some kind of a folk icon among the Californian blues revival circles brings Sidney again in the studios for several sessions for Chris Strachwitz and Kenneth Goldstein. Maiden blows behind K.C. and the wonderful Texas piano player Mercy Dee Walton. And in 1961 he also manages, at last, to record a good LP under his own name in which he displays a very strong influence of John Lee "Sonny Boy" Williamson.
After that, Sidney Maiden disappears completely. Accordingly to Richard Riggins (Harmonica Slim) who also lived in Fresno, Sidney, shortly after his album, went back to Louisiana to take care of his ageing mother and he would have died around Monroe (La) in 1970.
This mp3 comp gathers all the recordings made by Sidney as a leader.
Thanks to Kempen? Gerrit Robs and Pierre Monnery for their help and contributions to this article.
Gérard HERZHAFT