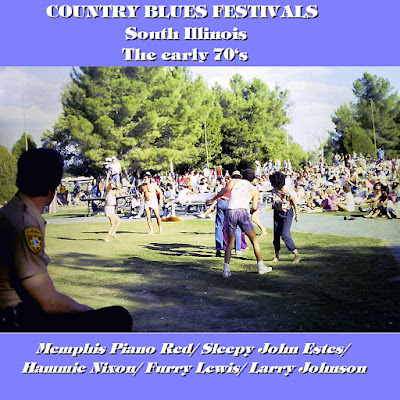 While the music enjoyed a more and more strong following in Europe, the late 60's and early 1970's were very lean years for the blues in the . Many a bluesmen that we saw and chatted with or interviewed when they were touring during this era told us that those European tours were almost the only lucrative gigs they had! The country blues artists who had enjoyed some quite large exposures during the early 1960's were now playing almost only for friends or family with a very few paid gigs in colleges and Universities or some folk clubs. I saw Larry Johnson in in a coffeehouse when he was playing a great set, backed by an excellent drummer (Bobby King), for an audience less than ten people, including us!

So those sets! They have been recorded at two distinct small Southern Illinois Festivals sponsored by the and have been available only very confidentially. Pianist Memphis Piano Red, legendaries bluesmen Furry Lewis, Sleepy John Estes, Hammie Nixon appear in good shape and deliver fine performances. But to my ears the highlight here is the still very young (at that time) Larry Johnson who demonstrates masterful Piedmont style country blues with a driving fingerpicking guitar style and good vocals.

Thanks a lot to all involved in the recordings and preservation of the music and to the website Downstate Sounds (Exploring the musical past of outside Chicagoland!) and enjoy this rare performances. 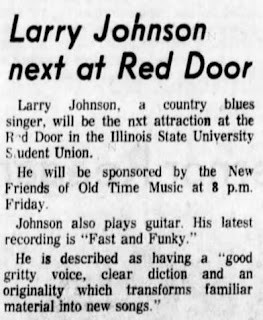 06. President Kennedy stayed away too long

12. Got the blues can't be satisfied

(The performances here were recorded by Greg Steil at )