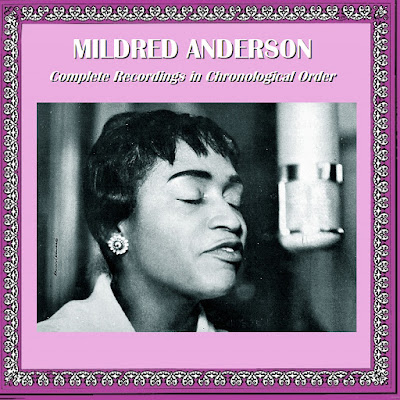 It's hard to believe that a fine female singer like Mildred Anderson who started her recording career with several top notch and famous bandleaders like Albert Ammons, Bill Doggett or Hot Lips Page, waxed two LP's for Prestige Bluesville in the early 60's, is so ill-documented.

No real article, interview or whatsoever of her in any known blues and jazz magazine (as far as I know), elusive liner notes about herself and her whereabouts, nothing really substantial!
So, and I guess it's the first time in my Blue Eye blog, here are the complete recordings of Ms Marion Anderson, a very good singer between jazz and blues, that I wasn't able to find much about! She is probably from the East Coast States like so many African Americans who resettled in the New York area during the 1940's. And she was probably born in the twenties! That's all!
She anyway started to sing and be recorded with maestro piano man Albert Ammons in 1946, is reported to have been - although briefly - the singer of Hot Lips Page's band, then with Bill Doggett during 1953, waxing three nice tracks... And then a gap before she was again in the studios, this time in 1960 for two albums for the then fledgling Prestige-Bluesville label. Once again she is backed by some of the finest jazzmen of the era: Eddie Lockjaw Davis (she might have been her band singer at that time?), Al Sears, organists Shirley Scott and Ernie Hayes, guitarist Lord Westbrook for a jazz and blues programme. Mildred is a very fine gritty alto singer and is able to breathe a strong blues feeling in any song.
What did she become after 1960? Of course those albums - like most of the Bluesvilles - certainly didn't sell very well and I remember seeing dozens of her two LPs on sale for a couple of Francs at the Saint Ouen Flee Market in the early 1960's! But it is very strange that judging her talents, her location (New York City!) and her pedigree, she wasn't more documented and she didn't resurface later....
Anyway, she leaves us a strong musical legacy which one is able to hear entirely over here.
Gérard HERZHAFT

Thanks to Marc for his help 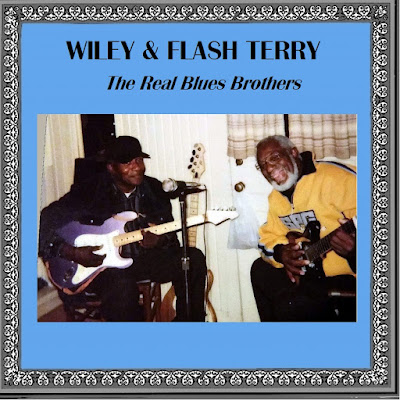 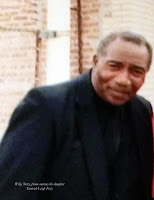 The blues brothers Wiley and Flash Terry are largely unknown outside some blues circles although they were remarkable guitar players who recorded some first rate music. Thanks to Wiley's daughter Tamirah Leigh Terry that I had the chance to be in contact with I have been able to document more accurately the career and life of her father.
Wiley Terry's Follow the leader, a two parts semi instrumental is currently enjoying a great reputation in Europe, particularly in the "popcorn" dance clubs. But he has offered much more.
Wiley Terry was born in Inola (Oklahoma) on October 9th, 1936, learning the guitar at an early age with his elder brother Flash. The famous Soul blues singer, Tulsa born Ted Taylor was also considered as a "brother" by the Terry Family and Wiley will be several years in the studio and on tour with Ted, delivering concise, precise, bluesy and full of feeling guitar solos on many records. Wiley lived in Arizona, Los Angeles, Florida, doing studio work everywhere. Before settling in Chicago permanently in 1964, where he waxed his two most famous 45t for the USA label (Follow the leader I & II, Shake it baby, Joker's wild dance). Tamirah remembers many bluesmen coming to the Terry's home: Howlin' Wolf, Koko Taylor, Willie Mabon, Albert King and many more. Wiley was even approached by James Brown to be a member of the JB's but he turned down the offer. Unfortunately, he had to give up his musical career and make a living as a truck driver and centered more his talents for his church. He died in Chicago on March, 1st 2010.
Tamirah thinks her father recorded much more than the four singles that we know from him. We have included here his three 45s, and just extracts from a single recorded in Los Angeles because, despite my efforts, I have been unable to get a good enough copy of what seem to be very spicy blues guitar instrumentals.
On the other hand, here is a track (with two takes named differently) that was probably recorded by Wiley in LA in 1961 but issued only years after under the odd nom de disque Kid Guitar Thompson.
The better known Wiley's elder brother Flash Terry (Verbie Gene Terry) was also born in Inola (Ok) on June, 17th 1934. He made many records under his name and behind others, touring and recording with Bobby Bland, Etta James, Bo Diddley, even Western Swing's veteran Leon Mc Auliffe and many others... He enjoyed some Hits but he too had to gave up music for years and make a more secure living as a bus driver in his hometown of Tulsa. When retired, Flash resumed his musical career, formed a new band with local youngsters, toured Europe and was even elected at the Oklahoma Jazz Hall of Fame. He died from a stroke in Tulsa on March, 18th 2003.
Thanks again to Tamirah Leigh Terry for her essential help. She is herself an excellent composer and singer who made some studio recordings and who is currently looking for some label and producer. ((https://www.facebook.com/musicsongbird?fref=ts)
Gérard HERZHAFT