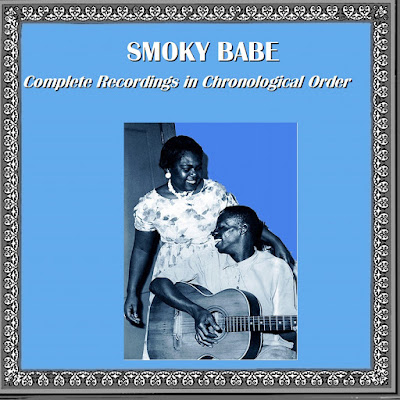 Born Robert Brown on July, 31st 1927 in Itta Bena (Ms), Smoky Babe has been one of the very best discovery from the Blues Revival era. A sharecropper helping his family at an early age and during years around Itta Bena, Smoky Babe has taken the guitar and the blues under the strong influence of Robert Petway and Tommy McClennan, seeing them performing and listening to their records. He developed the same rhythmic guitar style, full of a furious energy, the similar passionate singing and, if one adds a great ability to compose autobiographic blues and to make every standard his own, you sure have with him a major bluesman!

During the late 1940's and maybe at his mother's death, Smoky Babe leaves the miserable sharecropping to work in a factory in Alabama, then in New Orleans where he works as a longshoreman while playing sometimes in local clubs. Around 1953, he marries and the couple settles in Baton Rouge, buying a little farm and finding a good job as a car mechanic in a garage. He anyway plays here and there, mostly at friends' parties. It's like that and only by chance that Harry Oster discovers him in February 1960 during a party at Robert Pete Williams' house (his neighbor) where there are other Robert Pete's neighbors, Lazy Lester, Clyde Causey or William and Sally Dotson! Oster is stunned by Smoky's talents and then records him substantially during the following days. Those wonderful records when issued on several albums and anthologies stir interest in the then small coterie of blues buffs in the USA and Europe. But Smoky, quite suspicious, would turn down any offer to appear at colleges or festivals during the early 1960's, liking better to catch his steady work at his garage and his farm than trying his chance on a musical career.
He is reported to have died in Scottlandville around May 1973.
We have gathered here all his known recordings in chronological order. That still leaves at least 20 unissued tracks that are probably by now at the Smithsonian and that we certainly would be eager to be able to listen to!
Gérard HERZHAFT 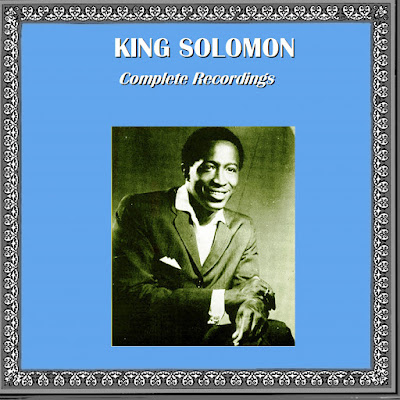 But the only "real" King Solomon (his real name) is this blues singer that we are featuring here. Born King Sylvester Lee Melicious Solomon on 12th October 1934 (or 1940? but this year sometimes given seems to be improbable even impossible) at Tallulah, La, he began to sing in his mother's church before creating his own Gospel a-capella quartet.
When King Solomon comes to Chicago in 1949 to work as a busboy in a restaurant, he listens more and more the blues in the Windy City's clubs, befriending with Sunnyland Slim. Soon one finds him singing the blues at Theresa's or at Du Sable Lounge. But, tired of the hard Chicago's winters, Solomon settles in Los Angeles in 1954, meeting Charles Brown, Lowell Fulson and Maxwell Davis who encourages him to form his own band. During the late 50's, King Solomon and his Soul Brothers Band play regularly in the L.A. area, Charles Wright holding the lead guitar. In 1961, his first autobiographic record Non Support blues Parts I & II hits the West Coast before being taken over by the Checker label, and then climbing to n°39 on Billboard.
Solomon then tours the Western States for awhile with big stars like B.B. King, Little Milton, Etta James and even opens for Sammy Davis Jr during a couple of weeks in Davis' cabaret in Las Vegas.
King Solomon records regularly during the 1960's for a large variety of labels, some important like Kent but generally for small independent ones like Don-J, Magnum or his own Mader-D. With a somewhat poor distribution, those records sell quite confidentially with the exception of the small local hit You are nothing but a teenager. 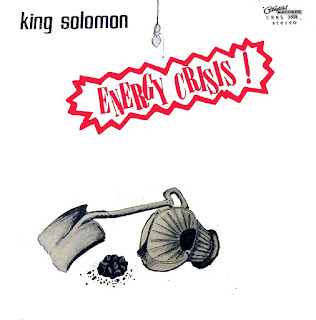 During the 1970's, Solomon seeks commercial success in turning his music towards the Rock/ Psychedelic audience, his guitarist Joe Kincaid playing constantly the wah-wah guitar and with heavy bass and drums. This is the music featured on the only album recorded as such by Solomon Energy Crisis, probably during the mid-70's (1977 is the date generally admitted).

Outside a small article on Blues Unlimited, King Solomon was mainly unknown outside his L.A. area until the excellent Dutch Diving Duck label issued a compilation of some of his best tracks during the mid-80's! 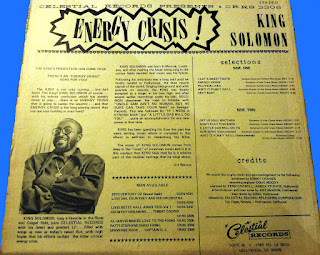 Today, one doesn't know if King Solomon is still living or if so where he lives. Anyway, his recorded work is much worthy. We have tried to gather the complete recordings by this King Solomon but there still are 5 numbers that have been impossible to find. Thanks by advance to anyone who would have them and would be willing to share!
Thanks to Diving Duck label, Mr Mightygroove and the excellent Groovy Gumbo blog for their help.
Gérard HERZHAFT