Although not often credited as a big name of the postwar Chicago blues, John Brim has been instrumental in creating the genre and most of his recordings may be considered as classics, notably the wonderful Rattlesnake and Tough times. 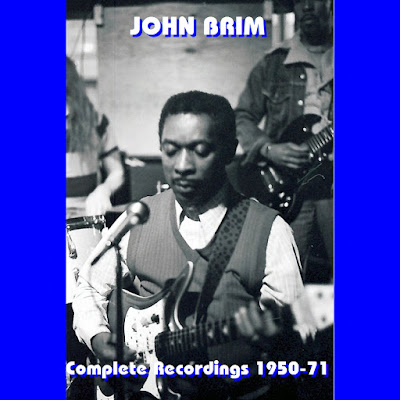 Born in Hopkinsville (Kentucky) on April, 10th 1922, John has been influenced by local bluesmen like guitarist Homer Wilson and harmonica player Phineas Cox. In 1941, he goes for work to Indianapolis, a town whose blues is still strongly affected by the music of the famous duo Leroy Carr & Scrapper Blackwell. John quickly takes part of the local blues scene, meets Scrapper Blackwell, Jesse Eldridge, the great singer Harmon Ray and Pete Franklin whose whom he forms a duo à la Carr/Blackwell!
In 1945, Brim leaves Indianapolis for Chicago, finds a good job in a laundry and plays in the Chicago clubs with Doctor Clayton, Tampa Red, Big Bill Broonzy and John Lee "Sonny Boy" Williamson, all of whom leaving their marks on his style. The younger John is also soon part of the "new" Chicago blues scene and he becomes friends and plays with Muddy, Little Walter, Willie Mabon and while also playing frequently in Gary (Indiana) he meets there Jimmy Reed, Eddie Taylor, Albert King and a young singer/ harp player Grace Millard who soon becomes her wife. They form a band together with Albert King on the drums. Albert being a little bit erratic on stage and in his life, Grace progressively takes the drummer role on the band. One night, one of the patron is none other than the pianist Big Maceo who offers them to go to Detroit and record with him in 1950 for the Fortune label.
Their recording career is then launched: John waxes another session with Roosevelt Sykes, signs with Joe Brown for his fledgling label JOB and records several stunning tracks in 1951-52, almost all masterpieces: broody voice, excellent lyrics, tight interaction between the guitar of Brim and the piano of Sunnyland Slim, a perfect updating of the Carr/ Blackwell music.
But JOB is a small outfit that never pays his artists and in 1953, John Brim who wants more from his music is in the Chess studio with the cream of the Chicago bluesmen, particularly Little Walter, Louis Myers, Eddie Taylor and Fred Below: Rattlesnake, blatantly inspired by Hound Dog, is a hit but Chess, facing a lawsuit by Leiber and Stoller, composers of Hound Dog, has to withdraw the record. In 1953, Brim plays the guitar behind his friend Albert King on his first ever session and also waxes the very strong Tough times which will become his best selling number as well as his trademark and an all-time Chicago postwar blues classic!
But there is not a strong feeling between John and Phil Chess and when, convinced by Jimmy Reed, he tries his luck at Vee Jay's (but no record issued whatsoever), Chess drops him definitively. The late 1950's are lean years for the deep blues like John Brim's. The Brims leave then Chicago for settling in Gary where they buy a laundry. But the music bug is still there, John teaching guitar and bass to his sons. And in 1971, the Brim family record a new 45 that unfortunately goes nowhere. He will have to wait 18 more years to be rediscovered by the valiant Austrian label Wolf, recording a new excellent session . Then, encouraged by young admirers, he will resume his musical career, appearing as a "living legend" in several festivals and recording two excellent CDs.
He dies on October, 1st, 2003 four years after his wife Grace, leaving a small but brilliant record legacy.
Gérard HERZHAFT

Alternate takes and tracks by Grace Brim are not included here