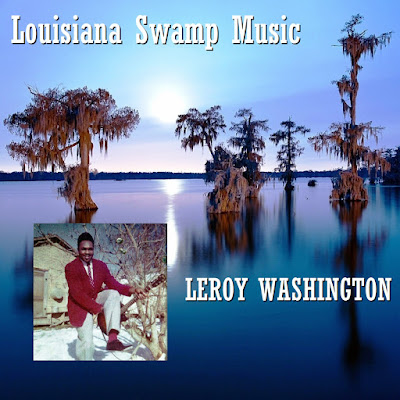 The previously "mysterious" top notch guitarist Leroy Washington is now much better known thanks to blues researcher Gene Tomko who published the results of his sleuth work in Living Blues n°222.
Leroy Washington was born 1st March 1932 at Palmetto, La. Being raised by his lone mother, the young boy had to work on the railroads to help his Ma makes ends meet. He also fooled around with a guitar at an early age listening blues and Cajun records from the local radio stations. Very skilled, he became an accomplished guitarist during the early 50's. Enough to form a duo with his neighbour Chuck Martin (who will become a well known Zydeco artist later on) and play in local juke joints and venues. Soon after, Leroy was the guitarist and sometimes bass player of the Guidry Brothers Band (then called the Honeydrippers) from Church Point.
Quickly, Leroy's guitar ability was famous enough to earn him the nickname of "The Guitar Wizard" and he embarked himself on a full time career as a musician, playing every night in the various clubs of Opelousas and Lake Charles. The influential Lake Charles'DJ Isaac Lutcher took him on his regular radio programme as well as a hired guitarist for all blues stars he brought to town like Roy Brown, Jimmy Reed, Clarence Garlow... Leroy befriended also with Guitar Gable who brought him to Crowley's producer J.D. Miller. Miller recorded Washington between 1957 to 1960 but despite a good local Hit with Wild Cherry, J.D. issued only three Leroy's 45s on Excello, Rocko and Zynn labels, the remainder of the sessions staying in the vaults for decades.