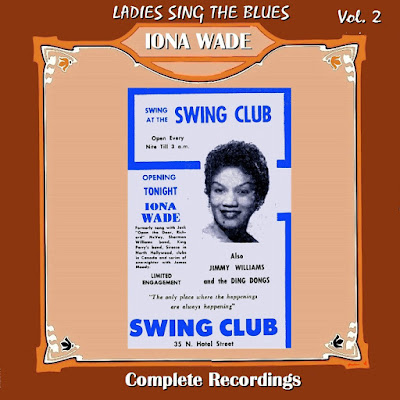 Iona Wade is certainly not a well known female blues singer. Like many of her peers from the immediate post war era she certainly was more interested to play and sing in shows, to be the featured singer of jazz-R&B bands which enjoyed constant touring and well paid venues than to record under her own name and try the near impossible task for a woman at that time to handle bands of her own. Although she had anyway waxed a nice output of recordings as Iona Wade, Iona Harlin or as the singer of great R&B/jazz bands like those of Sherman Williams, Bill Gaither, Joe Lutcher, Eric Von Schlitz or James Moody.

Very few is known about her life and whereabouts and there are only one or two mentions of her in blues and jazz magazines. According to Blues/ A regional experience (by Eric Le Blanc and Bob Eagle), she was born in march 1918 in Indianapolis from James Wade and Allie Ruth Kennedy. She started a singing career with pianist and bandleader Isaac "Snookum" Russell around 1942. But her first records were made as the featured vocalist of Sherman Williams' band. Sherman, a saxophonist and bandleader from Houston has a fairly large discography recorded in Nashville, Houston and Los Angeles in which Iona delivers silky and smooth vocals on a good number of blues and ballads. The newspapers of the time are praising her vocal talents, her stage control and her sex-appeal:
" With Sherman Williams will go of course the lovely and sweet singer Iona Wade who has been the rage at the Peacock Club for over five months" (Sid Thompson in "The Houston Informer", February 1947)
Iona and Sherman are constantly playing in and around Houston's best clubs, blacks or whites (!) during the late 1940's. With Sherman Williams, Iona toured nationally back to back with Johnny Moore's Three Blazes in 1947 and opened for blues shouter and hit maker Wynonie Harris.
She seemed to have left Williams somewhere during the early 1949 and we found her again in the studios in Los Angeles, this time fronting Bill Gaither's Madcaps band for a very good recording session. The next year, she is back in Houston (under the name Iona Harlin?), waxing some rare 45s with saxophonist Eric Von Schlitz's Big Six band who feature ace pianist Jay Mc Shann. After that, her appearances are getting scarce apart a title in Los Angeles with Joe Lutcher and an odd appearance with saxophonist James Moody's band in 1954.

She returns in the studio for a last 45 in 1962, this time with saxophonist and bandleader Wilbert Jiggs Hemsley for the small independent Vistone label located in San Pedro, California and owned by former Sam Phillips' employee Pete Korelich. Iona then disappears completely and we don't know what she became and when or where she probably died.

We have tried to gather almost all Iona's recordings but three titles from the super rare Eric Von Schlitz's sessions are still missing. A .mp3 copy would be greatly appreciated.
A lot of thanks to those who made possible this article and compilation: bluesjumpers33, Jose Yrrabera, and the websites Dead Wax and particularly Wired for Sound, always on top for providing infos from old Texas' recordings.