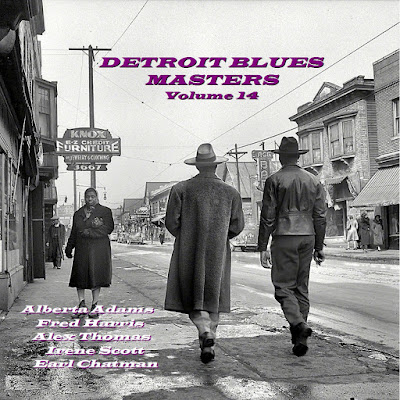 For this 14th opus of our Detroit Blues Masters Series, we are featuring some more obscure Detroit and Toledo dwellers who nevertheless waxed some good to great blues.

Alberta Adams (Roberta Louise Osborne born 2 July 1917 in Indianapolis and died on 25 December 2014 in Detroit) is certainly well known thanks to her "rediscovery" during the late XXth Century, a time when she recorded several very good albums and appeared on stages a little bit everywhere. But her recording debuts didn't bring her neither fame nor money. We feature here four from the five fine tracks she recorded in 1953 and 1962. Very much a great talent who has been too much neglected during her prime years.
Fred Harris is a very obscure piano and organ player from Toledo, a city 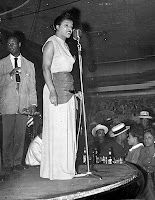 100 kilometers South of Detroit situated in Ohio. He has recorded seven titles between 1950 and 1957 as Fred Harris and his Orchestra or The Red Tops Organ Trio who featured the hard blowing tenor saxophonist and sometimes singer Big Joe Burrell.

Singer Alex Thomas has started as a vocalist and guitar player with no other than famed bands of Paul Williams and King Porter in 1947 and 1948 but his records were issued only years later and under the nickname...Muddy Waters or Muddy Walters! He recorded under his (almost) own name as Playboy Thomas in 1953. But whoever he was, his records are fine examples of Detroit blues.
I must confess my total ignorance of who was the fine soul blues singer Irene Scott who recorded a handful of tracks in Detroit during the late 1960's backed by the Chicago band of the Scott Brothers. She is of course probably a relative of this musical family.
And last but not least two much more downhome blues tracks by singer-guitarist Earl Chatman (sometimes spelled Chapman) from 1958. Chatman had also recorded a test for Fortune Records some years earlier in the company of pianist Henry Smith.
Much of the meager facts I have been able to grab for this article come from the excellent website Detroit Blues Society. And of course every additional details about those very obscure bluesmen/women would be great!
Gérard HERZHAFT