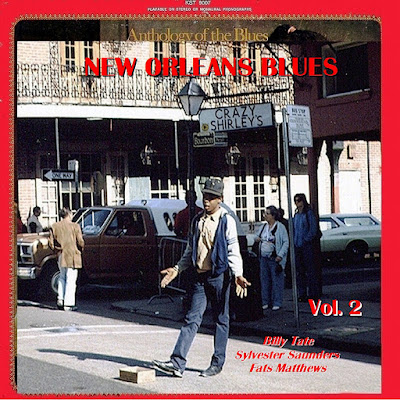 Let's go back once again to , folks!

For this new volume of our series, we are starting with singer, guitarist/ bassist Billy Tate. Born blind, Billy Tate was quite active in during the 1950's, doing many club and venues appearances, a lot of session works and recording 13 tracks under his name for several labels like Imperial or Peacock. Unfortunately, I have not been able to find much biographic details on this fine and underrated artist.

Sylvester Saunders (George Sanders Le Blanc) is another very fine singer who recorded only three singles for famous producer Cosimo Matassa during 1953-54. He was born in on 24th December 1929 and died at home in , 14 September 1998.

Allen (or Alan) "Fats" Matthews, also known as Fat Man Matthews was the front singer for Dave Bartholomew's band during the 1950's after Dave saw him perform at the Tijuana Club, searching for a Clyde McPhatter type of vocalist. Matthews recorded three singles under his name with Bartholomew's band. He was for a while member of the vocal groups, The Hawks but resurfaced as a solo leader during the late 1966 for a last session, still fronting Bartholomew's band. Fats Matthews was born in 1931 probably in . At that time, I've not been able to be sure of when (or even if) he died and where.

Almost all of the facts in this article come from John Broven (his first rate book Walking to New Orleans), Bob Eagle (Blues/ A regional experience) and Marv Goldberg's article about The Hawks. Thanks also to Rockthishouse for helping me get some rare tracks.