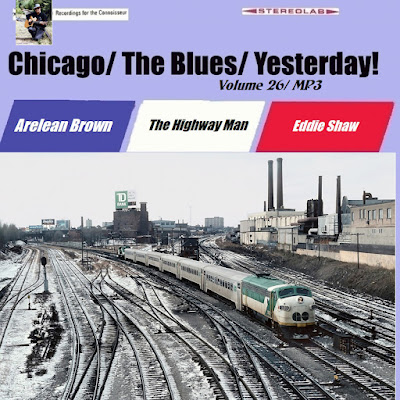 Let's go back to our very popular series "Chicago/ The blues Yesterday"!

For this 26th Volume, we start with the great singer Arelean Brown (1924 – 1981) who enjoyed a local hit with her witty I'm a streaker. Born in Tchula, Ms from a very musical family that encompassed blues luminaries like Otis and Abe Smothers, Lee Shot Williams, George Brown (who played guitar with Howlin' Wolf), Arelean started singing professionally in Detroit where she would have first recorded sides hitherto unissued. She relocated in Chicago, got friend with Little Mack Simmons for whom she recorded a handful of 45s backed by first rate Chicago musicians like

Lonnie Brooks, L.V. Johnson and Scotty & The Rib Tips. Although she had to make a living outside music Arelean managed to play regularly in clubs and even tour the Southern States. Her untimely death from cancer prevented her to make more records and tour where her singles were high praised with blues audiences. 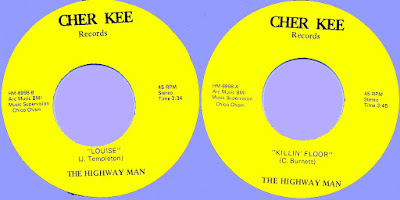 I don't know very much about The Highway Man whose real name was/is (?) William Holland. A good impersonator of Howlin' Wolf he has recorded two singles of four Wolf's well known songs. He is backed by the good guitarist L.C. Roby who is reputed to be his son. According to Rob Ford, those tracks by The Highway Man are only part of a whole album which unfortunately has never been issued. Any more info about this artist and L.C. Roby would be very much needed.
Eddie Shaw (1937-2018) is a very well known and high rated singer, saxophone player, harp player, bandleader, composer who played with Howlin' Wolf for two decades and ran his band during the maestro's last years. After backing Ike Turner and Little Milton while still a teenager in , Shaw joined Muddy Waters' band for some time in before teaming with Magic Sam (with whom he will record his first tracks under his own name) and then Howlin' Wolf. After the Wolf's death, Eddie Shaw kept his band together and toured the and as The Wolf Gang, recording a vibrant tribute to the Bluesmen of Yesterday on his first LP produced by Howlin' Wolf's widow. I had the chance to see Shaw and his Wolf Gang in during those years and he gave an extraordinary show with Hubert Sumlin at the top of his talent! After that, Shaw recorded many LPs and CDs (many for Red Rooster, the excellent Austrian's Wolf label! and one for the French Isabel), all of them being of a high level despite the absence of Hubert Sumlin. We have gathered all of Shaw's early tracks.

04. You're gonna miss me around here

08. Pushing our love aside

hog with my horn

33. Blues men of yesterday I

38. Sitting on top of the world