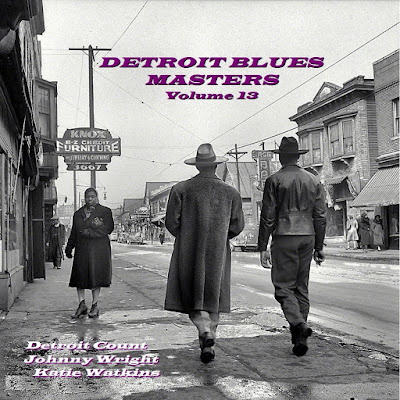 Let's start this new volume of our Detroit Blues Masters' series with the legendary singer-pianist Detroit Count, "legendary" mostly for his classic two sided storytelling of the Hastings Street Opera recorded by the great Joe Von Battle and reissued umpteenth times! But Bob White, the real name of Detroit Count has much more to offer. Bob, born in Chattanooga, Tennessee, around 1920 went to Detroit in 1938, seemingly already an accomplished barrelhouse pianist. He recorded as soon as 1940 with The Florida Kid and under his real name. His whereabouts during the war years are shady but it seems that he was drafted and served on the Pacific zone. Anyway, he recorded again in 1948 and 1949 as Detroit Count, then a well known character and musician of the burgeoning Hastings Street scene. He is at ease either on a boogie piece like Detroit boogie (Piano boogie) or a cocktail lounge piece. The early 1950's find him playing the piano and the organ Hammond and singing as a member of the Emmit Slay Trio. He waxed a last session in 1954 with the Sax Kari band that I unfortunately have been unable to get a copy. He disappeared from the musical scene after the mid-1950's and seems to have passed in Detroit around 1970. 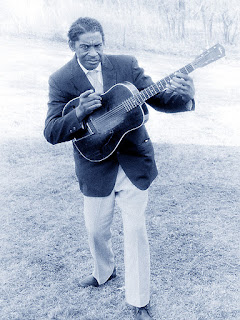 Although he recorded his first tracks in Detroit, singer and guitarist Johnny Wright is certainly not a Detroit blues performer. Born in Centerville, Tennessee February 20 1930, he began to sing and play guitar at an early age alongside his brothers Sherman (who played harmonica) and George (at the fiddle). In 1950, Johnny went to Saint Louis to try his luck. In a couple of years, he had gained a great reputation playing regularly at the Cosmopolitan Club He was even a member of an early Chuck Berry's band! In 1953, seeking for work in Detroit, Johnny recorded for Joe Von Battle the autobiographic blues I was in Saint Louis/ I stayed down boy that were issued on the DeLuxe label. The record gained enough attention for Johnny to be recorded by Ike Turner in Saint Louis. Wright then formed his own blues band and recorded again for the local Stevens label. Always seeking more opportunities, Johnny moved to Los Angeles, joined Ike Turner's band, formed a new personal one to play regularly in Southern California. But the 1960's were lean years for the blues and Johnny had to find a day job at Terre Haute, Indiana in a steel mill while playing week ends in local clubs with a white band under the nickname "Rolling Stone". He thus recorded a late 45s with the Steve Rusin band and played locally until his death at his Terre Haute's home on 2 June 1988.

Last but not least, singer Katie Watkins is a total unknown, having recorded two very down home blues in 1957-59, the first backed by the Sax Kari's band with Kari on guitar.
Thanks to all of those who helped for those researches, particularly the Dave Kyle's article on the National Road Magazine.
Gérard HERZHAFT

Thanks to our friend Tom Thumb, we have now three 1977 tracks by Johnny Wright backed by Steve Rusin and band: Coal Shed + Johnny's bad air boogie + I was in Saint Louis (solo guitar version with Steve Rusin). Those titles are there: