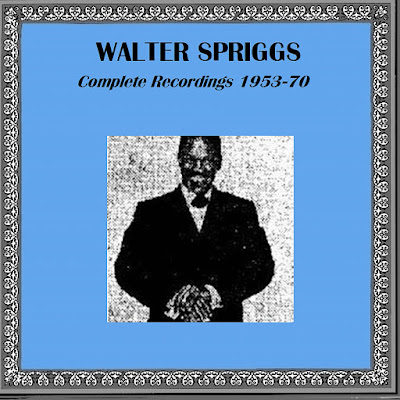 I'm quite often puzzled when finding in Blues Discography (Leslie Fancourt/ Eyeball Publisher) names almost unknown to me who have nevertheless quite a large discography...

Walter Spriggs, also recording under the names Wally Wilson or Ray Scott, being one of them, Blue Eye couldn't do otherwise that try to gather all or most of all his "blues" records made for Apollo, Blue Lake, Sabre, Atco, Antler, Tri-Ess, Decca, Jubilee....
Walter Spriggs is largely undocumented in Blues Magazines and the few things I have been able to gather come from Robert Pruter, Rob Ford, Jim O'Neal (who made a sleuth work!) and a few others hardcore researchers' writings, mostly on the net
Walter was born in Arkansas in 1933, the son of William and Ollie Spriggs who moved to Saint Louis (Mo) when Walter was a child. He seems to have played piano, guitar, drums when still a teenager. Whatever, we find our man in Chicago in 1952, singing the blues backed by Deacon Brown's band and around the same time in New York where he waxed a record for Apollo with saxophonist Charlie Ferguson's unit. According to the same sources (Chicago Defender), Walter Spriggs was quite active in Chicago during the mid-50's, playing in South Side's clubs with different bands like drummer Larry Wrice's Chicago All Stars. This is during those years that Walter recorded his bluesiest tracks for Chance and Blue Lake. And around the same time, he also recorded several singles as the tenor singer of the pre-doo woop vocal group The Five Echoes. 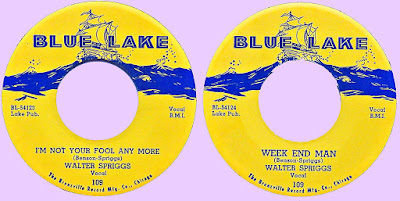 To complicate things a little more, Walter changed his name as Ray Scott around 1955 when another different (according to Jim O'Neal) Ray Scott was a Chicago drummer recording behind Little Willie Foster and Jimmy Reed! While Ray Scott-Walter Spriggs was still active in Chicago, Spriggs joined under his real name and as the featured vocalist the Kansas City Tomcats, a band led by guitarist Lucky Enois who was touring extensively from coast to coast. They recorded in New York City for Josie/ Jubilee two singles in 1955 and 1956.

While coming back to Chicago, Spriggs/ Ray Scott ran the Scotty's Rock and Roll Inn until at least 1957. Spriggs was there leading the house band who featured a very young Luther "Guitar Junior" Johnson and in 1959 Little Walter recorded his famous piece Nobody but you, a song composed by Walter Spriggs. The following years, we find Walter recording in New York for the Atco label and singing with the Jesse Stone's band. Other records for the tiny Antler and Tri-Ess labels were made under the name Ray Scott.
And then here is our man in Los Angeles singing in clubs and recording under the moniker Ray "The Great" Scott. A paper in the L.A. Sentinel on May, 30, 1963 unveils some details:  "Ray Scott, versatile singer, dancer, musician and comedian, who was christened Walter Spriggs and was born in Arkansas. According to the McGee piece, Scott had arrived in LA from New York City for a comedy gig at the Club Hideaway. He had begun billing himself as "The Great Scott." Spriggs/Scott had been doing comedy since 1959, and was said to know George Kirby and Redd Foxx, both of whom he would have had multiple opportunities to meet and observe in Chicago. His most recent recordings were mentioned, including "Silk, Satin & Lace.... He played bongos with Ray Hamilton, Billy Williams and Johnny Ray and toured 27 countries of Europe" !!!
During the 1960's Spriggs played comedy and also recorded raunchy tracks for Dootsie Williams in L.A. At last, we find Spriggs/Scott in New York City once again, running from his apartment of Central Park West a music publisher company called Spriggs Production in 1974. And a little later, Jim O'Neal spotted Spriggs in a Chicago club where he was opening for Johnnie Taylor! While at that time, Walter Spriggs was living permanently in Texas where he probably died unnoticed!
Whatever, we have tried to gather the most possible tracks recorded by this quite mysterious singer, bluesman, comedian, doo woop vocalist, etc... hoping to put some "real" music to lines of the current discography.
A lot of thanks to all those who helped on this research!
Gérard HERZHAFT