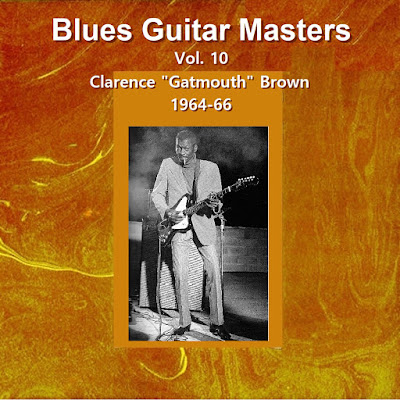 Clarence "Gatemouth" Brown (born 18th April 1924 at Vinton, La - † 10 September 2005 at , ) is of course a very well known bluesman, generally hailed as one of the master style guitarists. But he is of course much more than that, a good fiddler, harmonica player, occasionally drummer and even a pianist (I saw him play quite well this instrument before a concert), a great singer, showman and talented composer.... In fact, his talents stretched far beyond the blues. As he was exposed during his youth to the best Western Swing bands, he learned a lot from them and was always full of appreciation for Bob and Johnny Lee Wills, Milton Brown and many other Western Swing creators. He then was very comfortable to play Country Music: I saw him during the Montreux Jazz Festival 1979 playing before two different audiences first on the Country Music scene (jamming with Roy Clark, Buck Trent or Barbara Mandrell) during the afternoon and a few hours after on the blues scene during the evening! And of course he made several good Country Music and Cajun albums alongside people like Asleep at the Wheel or Roy Clark. Gate was also a very nice jazzman and although he didn't have the chance to prove it on his US recordings, thanks to French promoters like Jean Marie Monestier, Brown recorded several jazz or very jazzy albums for Black & Blue, backing tastefully many jazz musicians.

His first recordings for Aladdin and Peacock from the 1940's to 1960 are very well documented, reissued and largely available. But the early 1960's were a little bit lean years for Gate and he had to hold a day job outside of music for bread and butter. Between 1964 and 1966, he had the opportunity to resume his musical career, leading the house band for the pioneering Soul and blues TV program The Beat! produced and hosted by Hoss Allen and broadcasted from .


During this short two years terms, Gate (with probably his Nashville band) recorded again several sessions for small labels, one of those sessions being finally issued later on by the British Charly label which found the unissued tapes on the Chess vaults! Gate was of course playing great music on The Beat! and a couple of his tunes have been issued on a Hoss Allen's compilation CD. Some others, picked from TV programmes, are displayed here for the first time.

After 1966, Gate had very few gigs, couldn't keep a band and once again had to take a job outside music (he told us he was a sheriff somewhere in !).

Fortunately, after 1971 French tour operator brought Gate back on music. He was featured alongside Jimmy Dawkins, Big Joe Williams, Cousin Joe et al at the very successful blues Festival 1971. Although of course his links with the blues weren't obvious, Gate stole the shows almost everywhere, amazing blues fans with his showmanship and extraordinary guitar playing. So, Gatemouth came back very often in during the subsequent years, recording a lot of very good albums and, finally, making it again in his home country, headlining a lot of big US Festivals and recording more albums, particularly two masterpieces for Rounder.

I have gathered, I hope!, all his 1964-66 recordings, 45s, odd sessions, TV show etc...  which are not easily available and never displayed as a whole. I feel it fills a gap between his two careers and testifies of the same great skills during this decade than before or after! 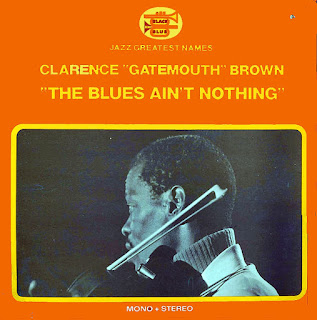 07. The grass is always greener

14. My time is expensive

20. Have you ever been mistreated

22. When the blue moon turns to gold again

26. I want you for my girlfriend