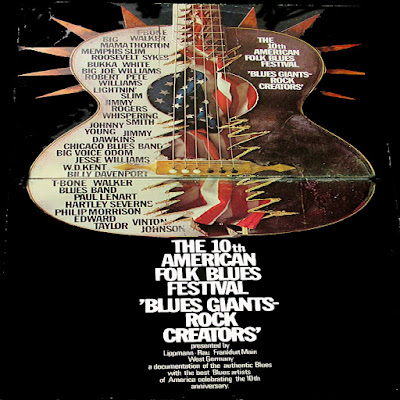 For an unknown reason to me, there were no AFBF tour in 1971. The 1970 edition was probably too unsuccessful commercially and even musically? Whatever, for the 10th Anniversary of this by now well established tour (and also more and more criticized by blues magazines and fans alike), the German promoters Lippman and Rau planned two tours of , one in March the other in October with two rather different line-ups. But by now, those tours were less and less attracting audiences and dates that were numerous still a couple of years before were now scarcer. A mere six dates in March and October! Mostly in with , and in March. And and again in October!

At that time I was living in , so not too far from Paris and I certainly would never miss a blues show in the Capital city. So I was able to attend to the two shows. As far as I remember, the March concert in was a total disaster despite an exciting lineup with Big Mama Thornton and T-Bone Walker coming back. If old Big Joe was his usual self good and Robert Pete Williams (who was a great revelation in 1966) did a too short set, Memphis Slim who was living in Paris and probably picked up at the last moment did his by now a little bit routine set of his old favorites. But the flop of the flop was T-Bone Walker who was so drunk that he was unable to do anything than stumble on stage, couldn't even put his guitar on his shoulder and had to be placed on the piano stool by the good Californian saxophonist Eddie Taylor (not the Chicago blues giant) where he tinkled away a few notes, generally out of tune, tentatively singing a couple of tunes while never succeeding to finish one! After some minutes of chaos, the audience booed him and he had to quit the stage, still stumbling and helped by the musicians who had to finish the set without their leader. What a sad show for such a blues giant! Big Mama was of course far better although she didn't get along too well with the band. But her set was totally ruined by T-Bone who was constantly coming back on stage, totally drunk and trying in vain to play guitar or piano behind poor Big Mama who had to throw him out of stage each time! No need to say that the audience was not very satisfied with this quite expensive concert! 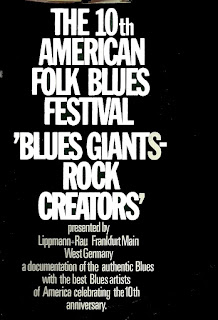 The October show was better with a then favorite Roosevelt Sykes, a great Bukka White and too short but quite good sets by Lightnin' Slim and Whispering Smith who had been at their peak a few months back during the Montreaux Jazz festival (backed by the Aces). Jimmy Rogers also was good as well as Jimmy Dawkins and the blues belter Big Voice Odom. But the AFBF formula had then showed its limits. 3 or 4 tunes by each bluesmen didn't gave them room enough to really take over the audience and prove their talents.

Those two AFBF 1972 tours didn't probably garnered enough money and they were the last. There won't be no AFBF the following years until Lippman and Rau would try to revive the formula without changing anything anyway during the early 1980's this time touring only in Germany and a few shows in Switzerland and Austria. With apparently not a tremendous success. I didn't attend to any of those 1980's tours, so I won't issue more AFBF's entries on my blog.

The times had drastically changed for the blues. By now, the blues was (largely thanks to those early AFBF's) a music recognized at its value in and many tours and festivals were displaying artists in a far better way. In 1979, I had the chance to be partly at the wheel of a Night of the Blues programme in . With the help of one of the most important Rock touring agent, we were able to gather Muddy Waters, B.B. King, Luther Allison, Taj Mahal and Sugar Blue (Lowell Fulson was programmed but couldn't come at the last moment) for a mammoth show that started at 7PM up to 3AM the next morning! The place was the Lyon's (built during the 1st century) and the attendance was more than 4500 paying visitors!

Well... I have here tried to gather the largest possible recordings from those AFBF 1972 tours, some "officials", most "unofficials". Despite the sloppy concerts, the music stands well the test of time and stays as a testimony of good blues by real bluesmen who had lived the blues and not only played it. All of them are by now dead and gone, so let's enjoy their recordings!

23. Better have your way

27. The new talking blues of

41. Walking through the park

43. Going back to church