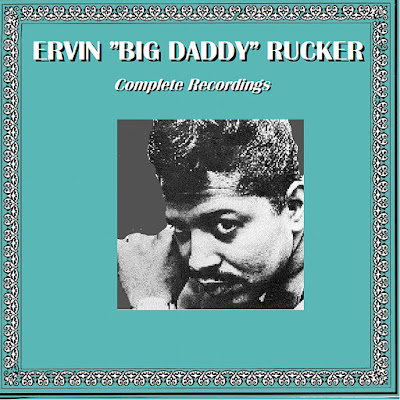 Despite the fact he has recorded more than 30 titles, enjoyed some minor hits and played music spanning a career of at least three decades and even having toured with the Johnny Otis Show, Ervin "Big Daddy" Rucker's life has been poorly documented. As far as I know, there is almost nothing on him in the Blues Magazines throughout the world outside some chronicles about his 45s, a few lines on LP's and CD's anthologies where he is featured, and most of the time utterly irrelevant except Ray Topping's liner notes on an old LP, very few on the web and, once again, mostly wrong...

OK, so thanks a lot to the indefatigable and very reliable Marv Goldberg for his help in sharing his information about the great and underrated blues singer Big Daddy Rucker.

First of all, as Marv says with a great sense of humour: " Repeat after me: "Ervin Rucker IS NOT Ervin Groves" (louder; I want the whole Internet to hear you). Rucker was another entertainer from (at least in 1972). When Rucker married in 1969, he gave his age as 34, therefore born in 1935 and several years younger than . He had releases on ' Musette and GME Records (for example, "She's Alright" & "Kids Together", both written by ). In 1972, when was in , Rucker was part of Johnny Otis' entourage "

Ervin (Irvin) Rucker was born 12 July Augusta (Ga) from Sidney and Lean (?) Rucker. He began to sing into his parents' church before switching to blues and R&B around 1952, mostly under the influence of Bobby Bland. At that time, Rucker was living in and he was soon singing with local bands particularly with tenor-sax/singer Mattie Jackson's Blues Nighthawks . He first recorded with them for the Linco label from () in January 1957 before being discovered by Jimmy Liggins who was looking for new talents for his fledgling Duplex label. Liggins recorded Rucker for Duplex, probably around fall 1957. While Liggins relocated his recording and musical activities in San Diego (Ca) in 1959, Rucker followed him and was again in the studio in 1959-60, backed this time by the Liggins brothers (Joe and Jimmy) for a couple of excellent tracks

During the 1960's, Big Daddy Rucker continued to play in California clubs and venues and to record for several small labels, produced sometimes by Big Boy Groves (hence the confusion about the two), enjoying some hits with Big Daddy's shake and Christmas in the ghetto. The early 70's find him as a featured vocalist to the Johnny Otis Show. He recorded four titles with Johnny Otis' small band with a young Shuggie Otis as the lead guitarist. He went to in 1972 with Johnny Otis. And then seems to have disappeared from the radars although even Marvin Gaye mentioned Big Daddy Rucker in his 1976 song Since I had you!

Thanks to Marv Goldberg we know that Rucker married Diaann Brown in , a short union that ended by a divorce in 1973. What have he done after that remains a mystery. He probably died 2 June but this is not for sure!

Anyway, here are the almost complete recordings of this very fine bluesman (I'm still missing two tracks). And once again a lot of thanks to Marv Goldberg without whom this article would have been way less documented.

13. No more rivers to cross

15. If you really really love me

19. Christmas in the ghetto

My friend Pierre Monnery has provided me a last (?) track by Ervin Rucker, recorded in 1979 in San Diego. 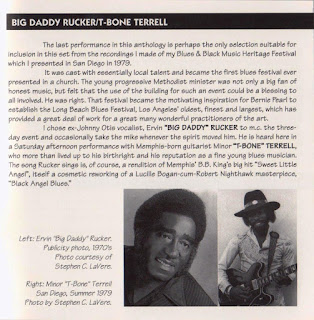