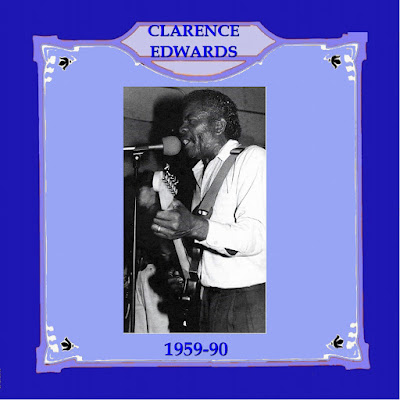 Although he never recorded for Jay Miller, Khoury, Shuler or any producers, Clarence Edwards was anyway a major exponent of the so-called Swamp blues as well as a fine acoustic traditional musician.

Clarence was born on 25d of March Lindsay (La). He became interested in music through records of Charlie Patton, Blind Lemon Jefferson and Howlin' Wolf and became a good guitarist in following those records. Never a professional musician (he made a living working on a Baton Rouge scrap yard for over than 30 years) he nevertheless played constantly in week ends since the early 1950's with several local louisiana bands like The Boogie Beats or The Bluebird Kings. While playing as a combo with Butch Cage, his brother Cornelius Edwards and Willie Thomas around the small town of , Edwards was "discovered" by folklorist Harry Oster in 1959 who recorded a good amount of blues and Zydeco acoustic tracks by Edwards on several sessions.

But Clarence had to wait until 1970 when researcher Terry Pattison was in charge by the rejuvenated Excello label to record the remaining Swamp blues musicians still playing around . Edwards was featured on the anthology playing alone as well as with a band and even a 45 was issued from those sessions. He also was captured live for another Excello album.

Although those albums gained very good critics from Europe, nothing appeared for Clarence in the . And it was almost by chance that in 1990 bassist, bandleader (Short Fuse) and producer Steve Coleridge stumbled on Clarence while he was playing in a club. Very aware of the strong musical potential Clarence had, Coleridge recorded him during a mammoth session that was issued on several albums on European labels, getting rave reviews from European magazines. Clarence Edwards had thus plans to tour Europe when he suffered an infection that caused his death on 20 may .

We have gathered here all his early sides that were scattered on several anthologies as well as some of his 1990's tracks. The remainder is easily available on the Wolf label. We have also not included his several live sessions in front of an audience.

41. Will the circle be unbroken